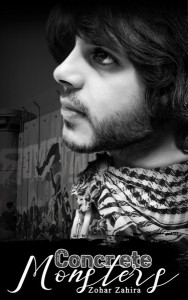 Pet shop boy Nadir has it all: a gorgeous Jewish wife, a hard-earned nursing license, and an affluent family, all safe and sorted in the loving hands of Christ. But Nadir's perfect world shatters when his people are outlawed by a rogue state and cooped up in impoverished ghettos that used to be their hometowns.
With a child on the way, Orli, Nadir's pragmatic wife, suggests sex work to make ends meet, but he's having none of it. Nadir decrees it's his job to provide for his family, and he soon finds out why exactly he had been so desperate to shield Orli from that world.
As the crucifix around his neck loses its luster, and he finds himself sleeping with everyone but his own wife, money becomes the least of Nadir's worries: his best friend wants to put him out of his misery, his little sister is falling for a bad man, and his cat keeps puking on his stuff.

Concrete Monsters by Zohar Zahira is the story of a young Palestinian nurse trying to keep his family out of poverty in a ghetto run by the Neo-Zionist Nation State of Israel.
Preis: 1,37 €
Hier über Amazon:
https://www.amazon.com/dp/B07BRVPQS6